I’m not even really sure where I should start this story. Always a good sign, right? I guess I’ll just start at the beginning. Fair warning: this is a long one so grab you something to drink and enjoy.

I graduated from Seminary in December of 2016 and decided to stay in NC for a variety of reasons. One of the biggest ones was that there just weren’t any doors really opening for me to leave and start a new life. I took a position as a nanny in January and really enjoyed these sweet little boys God had given me the opportunity to care for.

The plan was to be with them until the older one started kindergarten that September then one day in June, the mom told me she was quitting her job so she could be home with the boys. We were both devastated, but she knew it was the right thing so I was happy for her but I needed a way to provide for myself! God had given me this peace that I was supposed to stay in NC, that I was in the right place doing the right thing but when the rug gets pulled out from under you, it’s really hard not to panic. In my panic, I did the only thing I knew to do: continue working as a nanny. I found a family that I liked and nannied for them for a week but while I was at the beach on vacation, I found out they had decided to go a different way and didn’t need me. It was a hard blow and the week I came back I made almost no money. I interviewed with a couple different families and really thought I wasn’t going to have something until mid-August, but God provided when I signed a year-long contract with a family and started August 8th. I got comfortable; I was good at being a nanny. It was easy, work stayed at work and I didn’t really have to think about it. My plan was to start looking for jobs in the ministry during the summer because I wanted to honor my contract but God had other plans. The last week of April, they gave me a two weeks notice. I was off that first week of May and had planned to start looking for jobs. Literally thirty minutes before he told me that my job was ending in 2 weeks, I had set up two different meetings for the next week. I got in the car and just laughed saying “I get it, God, you’re really funny right now.” I clearly needed some more lessons in trusting Him.

I was trying to figure out what I was going to do next, when God brought to mind one of the ladies in the church that I had connected with earlier that year. I talked to her and filled her in on what was going on and she agreed to meet with me that afternoon. I cannot tell you how helpful that was. I had meeting with Bay Leaf’s Youth Minister the next day and had no idea what I was going to say. It went really well. As I was leaving, he suggested that I set a meeting with our senior pastor to just talk to him about pursuing ministry jobs as a woman.

When I walked into that meeting I had no idea what to expect but it was an incredible blessing when he said “Your love for people and your love for Jesus are evident and I want you here.” From that moment, I was sure that I was going to be working at Bay Leaf, although hoping it would be sooner rather than later.

When I worked my last week of as a nanny, I was confident that God was going to provide but I wasn’t sure exactly how. I stepped forward in faith and pursued the things God set in front of me. I had no idea how I was going to pay all my bills that were due at the beginning of the month. It was my birthday and everyone important to me knew I didn’t have a job. I really thought I’d get money for my birthday, but that didn’t happen and I started to panic. It was an even bigger blessing when that surprise check was not given to me by a family member who knew my need but in a way I never expected and it was exactly what I needed to pay my bills – God is good!

In another meeting with the Senior pastor, it was mentioned that Communications was an immediate need. Fun Fact: I have a Journalism degree! Things you might not know if you’re new around here. (You can read about my decision to have that major here.)

As I worked on pulling my portfolio together, I got a call about helping out with VBS. I really felt like God was telling me to do it even though I knew it meant not working that week. Can I just tell you that VBS was one of the big blessings of the summer? I got to love on some 3rd graders and get to know one of the ladies at church better!

I knew working VBS meant not working, but the next week was youth camp. I really wanted to go, I just wasn’t sure about giving up two weeks of working. One afternoon, I was sitting at the library reading 100 Days to Brave, day 27 and God spoke to me through this paragraph:

“If you’re looking at a closed door today, then there’s an open one just around the corner. Be brave enough to walk through the doors that the Lord leads you through. Even when they are unexpected or feel scary.” (Emphasis mine)

The scariest thing to me in that moment was to commit to youth camp, so I did it. I texted the youth pastor that afternoon and said: “I’m going. Decision made.” Fast forward TWO HOURS and my phone rings. I thought it might be a Bay Leaf number so I answered it. It was one of the executive pastors and he also wanted to meet with me! In a total and complete God moment, the little boy that I was helping with at VBS left early so I was able to duck out and change for my meeting. That meeting went great and I left so incredibly hopeful. My mom and step-dad were a huge help in some things that week and I could not have done it without them. Before I left for camp I sent him my portfolio and put it all in God’s hands. 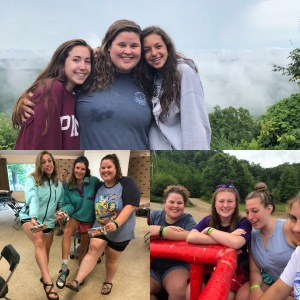 That week at camp was a great one and God did some major work in my own life as well as some of the students. Almost three weeks ago, I walked into a meeting and was offered a job at the church I love; the place that has become like home to me and provided me with family. It was a huge answer to prayer because it was a job in my field, doing the things I love. I am the Director of Communications at Bay Leaf Baptist Church.

Last summer when everything fell apart, I wrote down every little thing that showed me God’s faithfulness. One of those things was a quote from Annie F. Downs’ That Sound Fun Podcast episode with Jennie Allen, “God doesn’t just provide, He provides the best.” Y’all. I can’t. Because it’s so true.

These two months have been insane. I haven’t had a job and really felt like the Lord was telling me to keep it to myself, which was so hard for me. It wasn’t like I didn’t say anything if people asked, I just didn’t share with the world at large (read: post about it on Instagram). But I also have no doubt that I did the right thing, I am so incredibly thankful for all the love that I have gotten this week. On top of not having a job, one of my roommates and I, decided to move, which I’m doing this weekend so my whole life is changing this week. IT’S FINE. Finding a house and another roommate has been adventure all on its own, but God is faithful and He always provides.

I’m going to the beach with my family next weekend and I could not be more excited about getting to breathe a little bit. To get away from all the insanity of life, that is finally starting to calm down, and celebrate with my family is going to be so good for me.

Here are some of the biggest things God taught me:

One of the songs that has gotten me through this season is “How Far We’ve Come” By I AM THEY and I wanted to close by sharing the chorus with you.

16 thoughts on ““God doesn’t just provide, He provides the Best.””