I did a something that I never thought I’d do. I finished the TV Show Lost this weekend.

Okay, I know I’m beyond late to this party but it’s because I’ve spent the last ten years refusing to watch Lost. When I was in high school, Katie and Miranda discussed weekly and I had no clue what they were talking about. Because even then, I knew shows don’t work unless you start the beginning and I had been listening to them talk about the show for so long that I figured they had spoiled it for me. Over the years, it turned into all our refusal and any time anyone would bring up the show, I would sight that as my reason. I cannot tell you how many people suggested that I watch it, especially after I got into TV.

So why did I decide to watch it now? Enter Knox and Jamie. In February, they released a Lost deep dive which was the closest I ever came to starting the show. But then they announced they were coming to Raleigh and bought my ticket. Even though I was on the fence, I had to get the official confirmation that my refusal to watch Lost was stupid. And boy, did I ever. I got it from Knox, Jamie, Kendra, and Emily. After the show, Kendra was like “we need to talk about this Lost thing” and I told her what I had been thinking. She convinced me to consider it, I just had to find the right time. I know myself, I’m a binger (I watched all 9 season of One Tree Hill in 10 DAYS during a semester of GRAD SCHOOL). And once I commit to something, I’m usually pretty good about seeing it all the way through. When I had a week and half off work, I figured it was the perfect time to watch.

Two weeks ago, I started Lost and I wasn’t entirely sure what I was getting myself into. Now, normally when I watch a show that is off the air, I will google different things like when my favorite ship will get together. But I knew for this show, once I googled one thing it will be a death spiral and it would ruin the show. So, I did not google a single thing, the most I did was get on imdb to see where I knew that actor from.

I’m going to share some overall thoughts about the show, my favorite characters, and of course, the famous ending. (Yes, this is going to contain spoilers, so if you haven’t watched it, just stop reading now!)

I’m a writer so I tend to latch on character and storylines. I will stick shows out as there a character I love around or just to see how a particular plot point resolves. So, let’s talk about some of the characters I loved.

Sawyer (AKA James Ford): From the beginning my roommate, Heather, was pushing Jack on me but I fell for Sawyer (Now, Jack and Kate forever, but’s later). I knew I was 100% a Sawyer when Episode 508: LaFluer started with two Dharma guys complaining about having to wake up LeFluer, who turned out to be Sawyer. My hands when into the air and I started laughing, I was so excited. He was the perfect Southern bad boy. But let me you, I did not want him with Kate. Now, I loved his relationship with Juilette and I *might have* cried with him when she disappeared down the hole and then when died (SUCH FALSE HOPE). During the finale, when it was finally revealed that she was Jack’s ex-wife, I knew she was key for Sawyer and their final scene was just perfection.

Sun Kwon: I wasn’t sure what to make of the non-English speaking Korean couple at first. Sun quickly became one of my favorites with sassiness and butt-kicking attitude. I loved everything from her backstory, her pregnancy, losing her husband–all of it.

Okay, he’s the villian we all love to hate, right? No, just me? Cool.

Ben Linus: I never really knew if I could trust him or not. I would get so frustrated with other characters trying to reason with him and it never working out. But in my mind, that’s what made him a good villian.

Jack Shepherd and Kate Austen: I can’t just talk about one of them because they go together in my mind (like Meredith and Derek or Oliver and Felicity). I wanted them together from the moment she sewed him up on the pilot. I was so happy when they were together for the briefest of moments during their time off the island. I hated the love triangle that was Kate, Jack, and Sawyer. I can’t tell you how many times during season 6 I was yelling for them to kiss and how happy I was when they finally did.

***I watch Once Upon A Time which was created by guys who worked on Lost and SO MANY Lost people have been on Once like Claire, Juilette, Hurley, and Charlotte. I knew that going in which affected how I saw some of the characters. Like I hated Charlotte but I know it’s because Zelena influenced my ability to be able to trust her. Now, can we talk about something for a hot second. I love Regina with my entire heart, she rivals Felicity for my favorite character on television and I knew that she had been on Lost so explain me how maybe a minute of screen time and like five lines puts you in the same catagory as some of the main esemble? 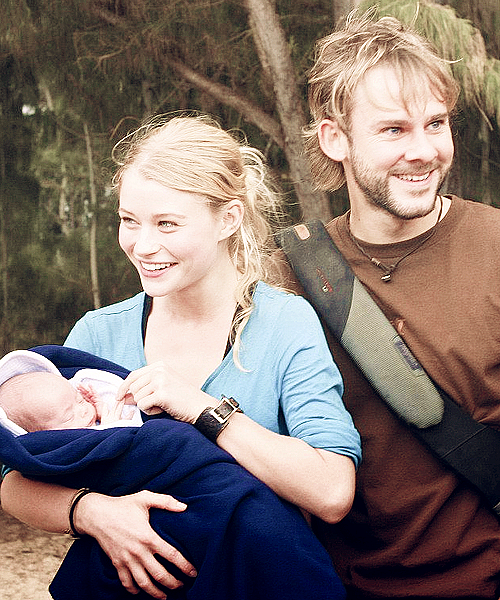 Claire Littleton: It is a rare occasion when I can see an actor in two different roles and be able to fully separate them. But that is the case with Emilie de Ravene who plays Belle on Once and Claire on Lost. I never one time saw her as Belle which is impressive for me because I knew her as Belle first. But I love Claire and Charlie together. I understood her pushing him away while trying to figure out if he was using again or not. When he died and Claire found out, my heart broke with hers. Also, my favorite twist in the entire show was that Jack and Claire are brother and sister (It resulted in an all caps text to Heather which I’m sure made her laugh!)

I spent the majority of my time watching confused about one thing or another but I think I got all my burning questions answered. Well, other than: How is that show billed? Please, someone explain it to me because it just doensn’t make sense in my brain.

Okay, let’s about that ending: My baby brother loves Lost and he even got my grandparents hooked on it. So, when I told him I finished he asked me about the ending. Here’s the thing: I knew going in that the ending was weird and confusing. So, I didn’t have expectations for something different. Did I hate it? No, everyone I wanted to togeher was together: Jack and Katie, Sawyer and Juilette, Charlie and Claire, Hugo and Libby. Was it was my favorite series finale? Not by a long shot. But I put a lot of trust in showrunners and writers who have been telling the story. To quote the show: “What happened, happened” but in the end, I was happy.

Now I can say I watched Lost. Thanks to Knox, Jamie, and especially Kendra for talking me into this wonderful decision. I’ve listened to Knox and Jamie’s Deep Dive but if you have any suggestions on things for me to read, watch, or listen to that will gve me a better understanding PLEASE send them my way.

I would ask for show suggestions but Fall TV is FINALLY back next week and I’m doing a post about some of my favorite shows on Thursday. I didn’t intend for this to be a fully TV week but I finished Lost and this post wrote itself. For next week, I have a post coming about God’s Faithfulness where I’m going to share about my July.